Alan Lasser's Game of the Week

Are the computers up to something?  The opponents in this game at TCEC 10 assembled a knight formation on the c-file, maintaining it for a dozen moves.  The programs are not supposed to be communicating with each other.  It’s just some random occurrence the way the remaining knights lined up again in the game and a couple of times in the analysis.

Posted by Connecticut Chess Magazine by Rob Roy at 4:03 PM

Alan Lasser's Game Of The Week

Posted by Connecticut Chess Magazine by Rob Roy at 9:03 AM 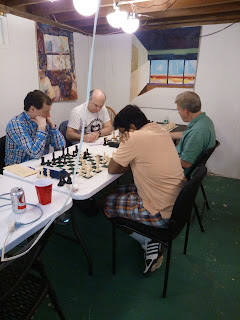 We take notice of Nakul Ramaswamy, a junior player, who scored two wins in this three round tournament for adults. He picked up 36 rating points, and 53 Quick rating points.

Rob Roy organized, hosted, and served as TD. The Beaver Moon Open Chess Tournament on Nov. 4 Sat. is the next event in Coventry Conn.

Written by Gaetano Bompastore: Rob Roy's girlfriend, Liz, made homemade meatballs with onion and garlic in 'em, a delicious sauce, ziti, rolls, a three been salad with tomatoes, scallions, marinated in balsamic and lime juice, an Indian chicken curry dish with rice. It was outstanding! Rob provides an open bar with beer, wine, Jim Beam, Johnnie Walker, Yukon Jack, Hennessy, etc.. They are very generous and kind; they open their home and their lives to all for chess. I'm honored to go.

Bob Cyr brought donuts and ice tea for everyone to enjoy. Congrats to Bob Cyr for his 30 years of service to the New Britain Chess Club.  Bob Cyr has been composing "History of Chess Clubs in Connecticut" from very old newspaper reports archived in our state library system.

The Connecticut State Chess Association, at its annual meeting this past Oct 1, certified Rob Roy's "Connecticut Chess Magazine" as the official chess publication for Connecticut, like it was back in the 70's, 80's and 90's, when Rob was President. Rob wants to promote, and report on, all chess activity in Connecticut.

Connecticut Chess Magazine currently has about 200 subscribers to its blog for local chess news, this will increase dramatically in the upcoming year.  CCM on Facebook has more than 10,000 readers, but most live too far away to attend chess events held in Connecticut.

Many thanks to Bob Milardo who served many years as Treasurer and also as VP. Milardo, with his expertise on "Robert's Rules of Order" parliamentary procedures, chaired many CSCA meetings. Among his many accomplishments Milardo won many tournaments and served as an officer for many years at the New Britain Chess Club. Milardo represented Connecticut as a delegate to many national federation meetings. Milardo volunteered to teach many chess classes at state prisons. Milardo is also a strong backgammon player.

No report from the Norwich Chess Club. Rob Roy has stepped down as acting president of Norwich's Otis Library Chess Club after serving more than a year. This club is in desperate need of leadership. We are asking for volunteers from this club to step forward and help provide organized activity for their members. I can provide advice and help, write to ConnecticutChess@gmail.com

Posted by Connecticut Chess Magazine by Rob Roy at 4:11 PM