Game of the Week, by Alan Lasser

The 2018 Constitution Open at the Rob Roy Chess Center of Coventry Connecticut was won by Dan Smith, who hosts the Thursday night Westerly Chess Club at the public library in Westerly, Rhode Island.  These two dedicated chess organizers deserve all the free publicity I can give to a small chess area of the wide chess world.  In this crucial last round game, Black gets the two bishops against the two knights;  but the center is clogged so the knights can keep the evaluation balanced until the board loosens up a bit.
Nakul Ramaswamy-Dan Smith
5/19/18
2018 Constitution State Open
Coventry, CT 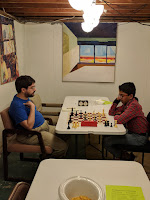 Dan Smith of RI won clear first at the 2018 Constitution State Open held May 19 at the Rob Roy Chess Center in Coventry Conn.

Smith runs his chess club every Thursday 5:30 pm at the public library of Westerly RI. Smith won $160 and picked up 111 points on his USCF rating.

Bourque runs his chess club Thursdays 7 pm at the Stafford Springs town hall. The Reverand Hugh James runs a church in Norwich, and Rob Roy the center in Coventry.

Fairfield County Chess Club in Norwalk also selected May 19 to host a team event, (57 players), which ultimately took four players away from Coventry.

Our attendance was merely 8 players, down from our usual 12.  To break even with expenses we needed 12 players. We finished $120 in the red.  We are going forward with plans to conduct our next tournament for Saturday June 23.

Currently there are no other chess tournaments scheduled for June 23 within 80 miles, so we expect our top players to be back again in full swing. 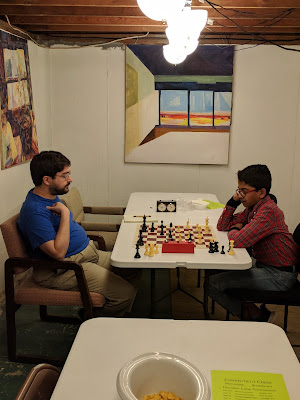 Chess Game of the Week, by Alan Lasser

Who is this man ?   Scroll down below for answer 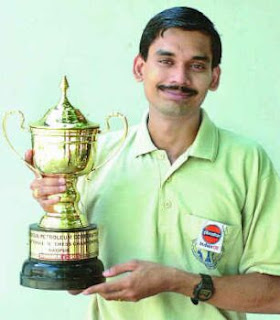 My previous count of the recorded games of Yixin Li was a bit off, omitting his blindfold game against Rod Hajaj, his game on first board at the last UMass-Amherst match, and there are 14 recorded games against me, not 13. The revised total is 25, but many are game/15s of dubious quality. Below are a few more of the better ones. 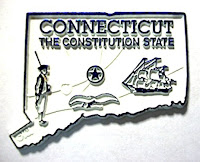 Prizes:  70% of entries returned as prizes.  Prize amounts based on 40. 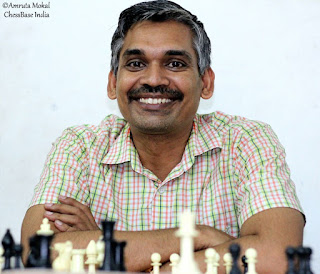 Answer to quiz:  R B Ramesh

Posted by Connecticut Chess Magazine by Rob Roy at 10:37 AM

THE TOP 5 MOST DANGEROUS PLAYERS EVER 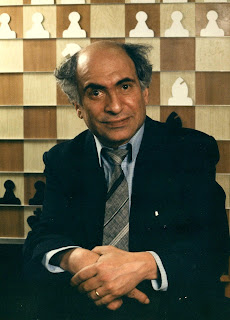 The 5 Most Dangerous Chess Players Ever

Don't try and beat AI, merge with it

Getting beaten by Deep Blue seems to have had an effect

Get Involved in the Game of Chess

Please subscribe to our email newsletter.
It is managed by FeedBurner, you can
unsubscribe whenever you wish.

Please forward this email to chess friends
especially if they live in Connecticut USA. 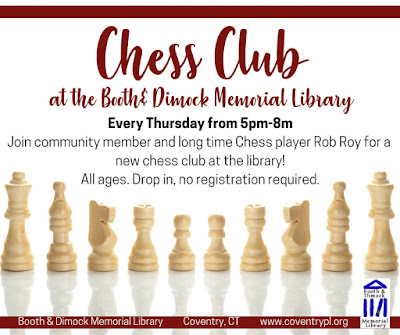 Free to all students and players.

Posted by Connecticut Chess Magazine by Rob Roy at 2:00 PM

Chess Game of the Week by Alan Lasser 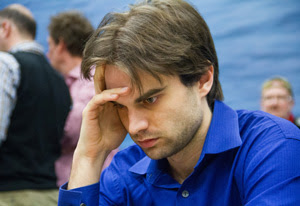 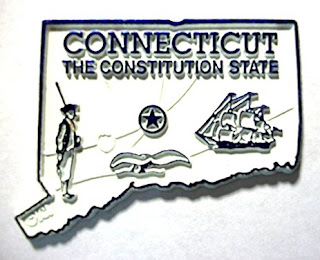 Posted by Connecticut Chess Magazine by Rob Roy at 10:31 AM

Hi Rob,
You may post the following notes to the recent meeting on your blog.
Please note that I have been honored to have been a contributor to the CSCA for the last 25 or so years.  I got involved because I was grateful to be in a state where I had a chance to win a state title and to the people who made that opportunity possible.  I never did anything to increase my chances of winning a title or to profit financially.
I had the honor of working with Frank Camaratta, Rob Roy, Michael Stango, Fred Townsend and Jim Celone as presidents and numerous other contributors.  It is now a good time for me to step aside and make room for younger and fresher faces.  But I think you will agree that I do not intend to "go quietly."  I clearly spoke more at this last meeting than I did in any previous one.
--------------------------------------------------
A meeting was held on April 28, 2018 at the West Haven Police Department.
Time will tell whether or not it will stand as an official meeting of the CSCA.  It was the third, and hopefully last in a series of disputed meetings of the CSCA.
A quorum was declared on the basis that the Oct 1 meeting was invalid due to lack of a quorum.  This despite the ruling of the chair that a quorum had been achieved on Oct 1.
I objected to the meeting on this basis and Jim promised to distribute his legal expert opinion as to the invalidation of the Oct 1 meeting.
I also objected to the meeting on the basis that many directors and members of the CSCA could not attend due to the conflict with the Eastern Class Championships in Sturbridge.
When Bob Milardo arrived, a quorum was declared, consisting of several directors whose terms had lapsed and one on the phone (who had prevoisly resigned?).
There was a very impressive turnout, however, including both long time members and newly minted ones ($5 at the door).
Jim Celone chaired the meeting and Bob Milardo acted as parlimentarian.
Old directors were reinstated and two(?) new ones were added:  Derek Mansfield and Al Pinto.  Both are long time players and real contributors to chess.
Jim Celone, Bob Milardo, Bruce Swan and Richard Chang were reinstated as directors.
Officers were elected and Jim was elected president.  He then compiled a slate of the other officers to be moved.  I don't remember everyone (CJ?) but do know that Bob Milardo was elected Treasurer and CJ, Secretary.  Scholastic Grants and Ombudsman remain open (volunteers?).  Jim nominated me and then Rich Jackson for Ombudsman, but we both declined.
After the election of directors, the meeting went into (semi) closed session where non directors were allowed to observe but not participate.  Disciplinary action toward members was discussed.  Prior to this I suggested that this may not be in the interest of a true statewide organization.
The damage caused by the Lumelski lawsuit was detailed and Alex Lumelski was Censored.  The decision of punishment was deferred.
Jim asked the board to also censor Gert Hillhorst for "stealing" the website.  I felt compelled to add (since I had not heard it mentioned) that Gert had designed the website and was generously praised by Jim at the time.  Jim responded that there is a logo he designed that he would like removed from the alternate website.  Our exchange was then ruled out of order for the closed session.
Nevertheless, Bob Millardo argued against Gert's censure and it was dropped.
I don't know of any other business discussed, but will await CJ's official report.
While I do object to this meeting based on timing, difficulty determining the board, methods of notification, etc., it was nice to see so many old and new faces in a room to discuss chess in Connecticut.
Good Luck,
Rick Bauer

Prizes:  70% of entries returned as prizes.  Prize amounts based on 40.