How to set your chess clock

What is Chess ? by Ben McCready

11/23
The first West Hartford Scholastic Chess Camp and Tournament organized by Norman Burtness was a big success with 19 scholastic players attending the camp. Candidate Masters Joe Bihlmeyer and Suhas Kodali and NM Derek Meredith were the instructors. The tournament was by Carter Clayton; crosstable 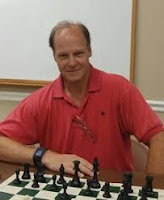 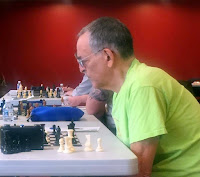 Here’s an ending rarely seen; on move sixty, it’s two rooks and a bishop versus a knight, a bishop, and five pawns. The computer thinks Black was losing after move fifty-three, when he still had one last pawn and White had six; but there was still one last chance to save the game.

GOING BACK IN TIME with Bob Cyr 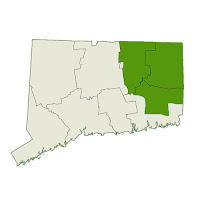 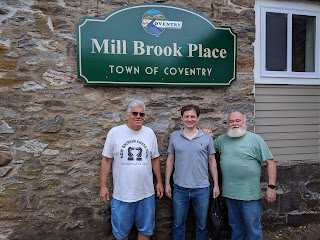 Most Frequent Players (after tnmt #44) 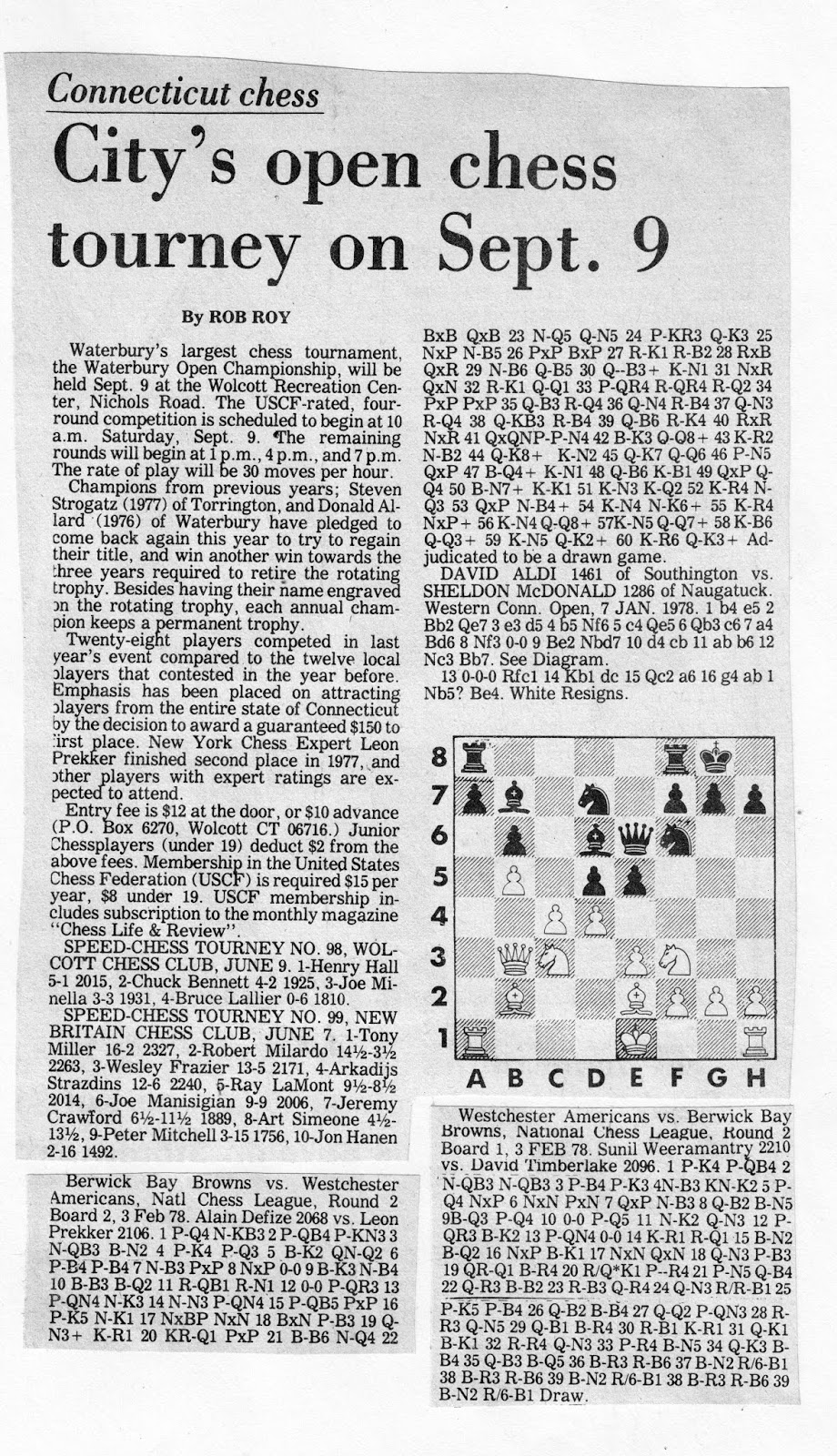 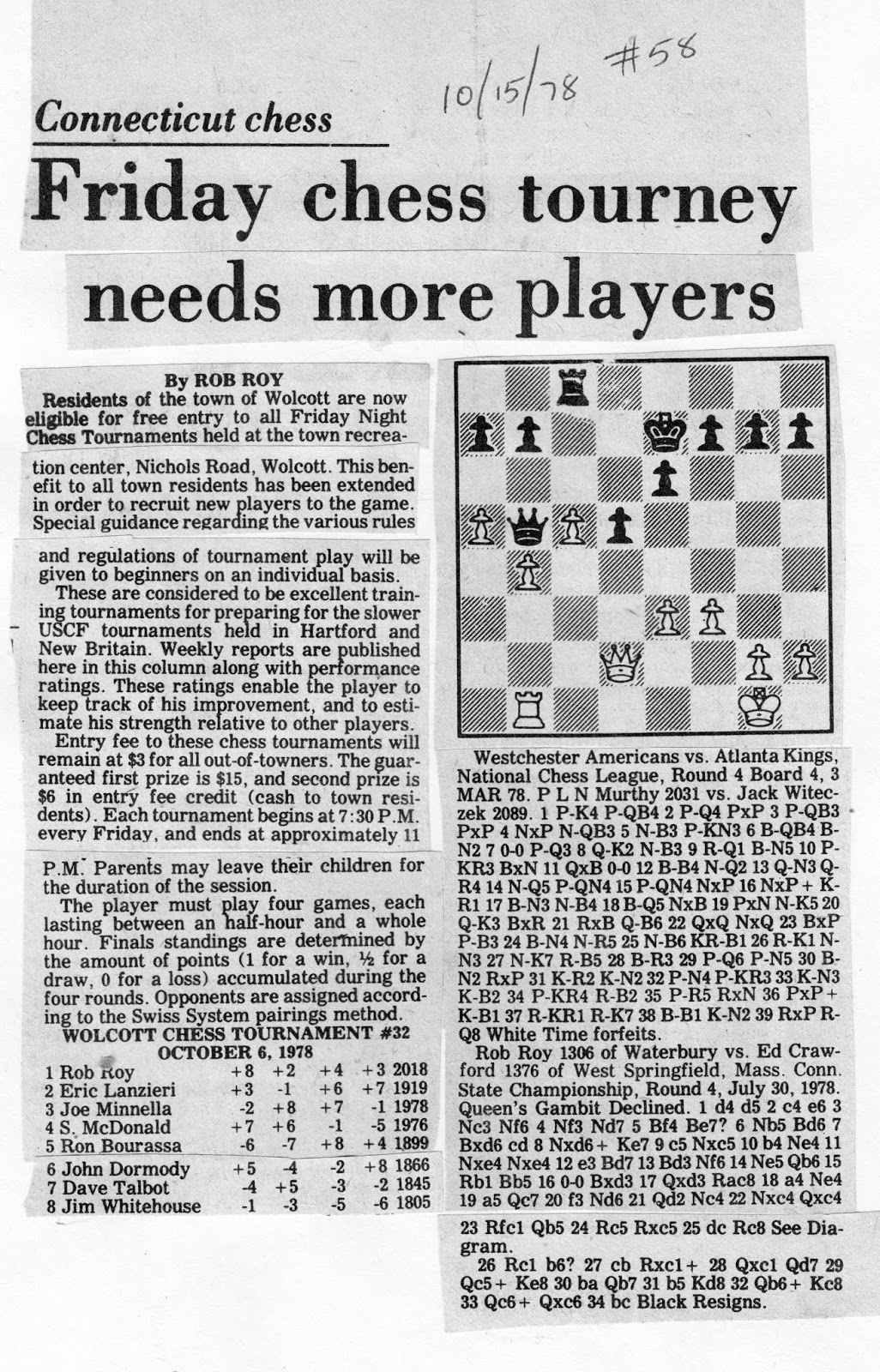 Posted by Connecticut Chess Magazine by Rob Roy at 7:31 PM Links to this post

GOING BACK IN TIME with Bob Cyr

Judge Kirkham, who was also a prominent chess master and Connecticut chess champion, worked closely with other newly formed chess organizations in our state, such as Waterbury, Hartford, New Haven, and Bridgeport, to hold inter-club matches. These events drew a respectable amount of interest and ultimately helped promote our organization and Connecticut chess. In addition to these matches, the NBCC held smaller and more informal tournaments during its regular meetings. Membership levels remained fairly constant during the 1900s and early 1910s, but most chess activities came to a crashing halt as the nation entered WWI. Based on a lack of records, it appears that WWI caused the disbandment of many Connecticut chess clubs.
The NBCC began to re-emerge sometime in the late 1920s. Two of our club’s presidents over the next two decades worked zealously to re-energize our organization: Boleslaw Gryboski in the 1930s and Edmund Roman in the 1940s. These leaders were instrumental in rebuilding a membership base and creating a more structured schedule of activities, including organizing annual club and city championship events to boost membership. Our club also continued to hold joint events with the Hartford Chess Club to attract interest throughout our chess community. However, our leaders’ efforts to keep our club active proved to be quite challenging during these times. First, tragedy struck our club in the mid-1930s when a fire occurred at our meeting place at the United Building on Main Street, destroying many club records and forcing us to relocate. We soon moved to Nathan Hale Junior High School and then to Falcon Crest Hall in New Britain. Then, in 1941, the NBCC lost some of its members because of the draft during WWII. If there was any silver lining for our club during this war, it was that meetings were still held despite a decline in membership. After 1945, membership slowly rose, and it was the task of President Roman and others to ensure that our club would sustain in the second half of the twentieth century. 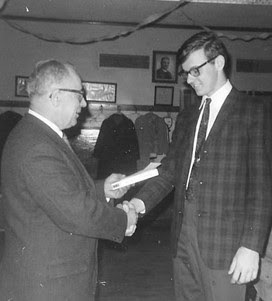 In 1951, Arkadijs Strazdins, who would eventually become the NBCC’s greatest advocate and contributor and the most influential member in our club’s history, joined our organization. Our club saw many changes in leadership in the mid-to-late 1950s, and membership was still low. However, by the early 1960s, our club started exploring ways to get more involved in the state-wide scene in hopes of sparking more interest in our chess community. Mr. Strazdins, who began his life-long service to the NBCC, often worked with its officers throughout the 1950s and 1960s to arrange and host a variety of matches, simultaneous chess exhibitions, and tournaments, including the annual New Britain Summer Open Chess Championship, which started in 1966 and which would eventually become Connecticut’s grandest summer chess event.
As our club continued to fulfill its most important mission of providing a facility and a social environment for chess, the level of membership rebounded. When the Bobby Fischer boom occurred in the early 1970s, membership soared to unprecedented levels. By 1973, the NBCC had 119 members - a record that would not be challenged until 2010, 2019, and 2017, when membership reached 101, 101, and 104, respectively. Mr. Strazdins, who took the helm as president in 1970, led our club during one of its most prosperous periods. 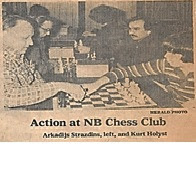 For nearly twenty years, between the mid-1950s and the mid-1970s, our club held its meetings at the General Holler Post in New Britain. Our club was grateful to Jan Cendrowski, a commander of the post and our club president in the 1960s, for securing that venue for so long. Unfortunately, due to extenuating circumstances, our club was forced to relocate from that site in 1975. The move came at a time when our club attained peak membership. Thankfully, Mr. Strazdins was able to find and secure a hall at the New Britain Quartette Club, where our club would stay for the next thirty-five years.
With the relocation behind us, our club focused on playing a more pivotal role in the development of Connecticut chess. By 1980, the NBCC was the third-largest chess club in Connecticut behind Hartford and New Haven. Mr. Strazdins, who had won over fifty major club tournaments by then, worked tirelessly to promote our organization in his many capacities as an officer, tournament director, and team captain. He worked countless hours to ensure that our club would remain vibrant in the coming decades. Due to Mr. Strazdins’ steadfast efforts, our club emerged as Connecticut’s largest chess organization by the mid-to-late 1980s. 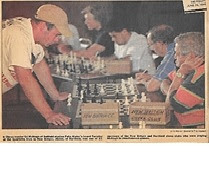 Mr. Strazdins continued pursuing his passion for and devotion to our club well into the 1990s by keeping its image alive and well. Around the turn of the century, Mr. Strazdins regrettably had to take a step back from club operations because of declining health. His son, Andris, who was our club’s treasurer since 1973, worked passionately with the other officers and tournament directors to ensure that his father’s vision for our club was fulfilled.
The early years of the twenty-first century saw significant changes in leadership in our club, with the stepping down of Mr. Strazdins as president after serving thirty-one years. The new officers then and today were and have been inspired by Mr. Strazdins’ work for our club, and they have kept alive the traditions that he established during his five decades of service to our organization. Moreover, our administrators from 2001 to the present have created their own interesting and unique ideas to benefit our club’s growth, many of which have resulted in the biggest expansion of our club’s social network and have attracted many scholastic chess players. 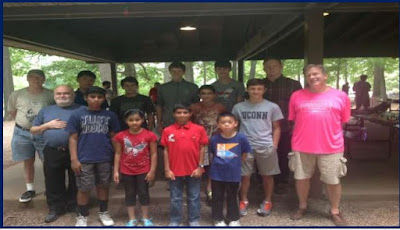 In 2010, our club left the New Britain Quartette Club and relocated to the New Britain Assyrian Community Center, where we stayed for four years. In 2014, our club moved to our current venue at the Armenian Church of the Holy Resurrection in New Britain. During both relocations, our organization lost some members but remained a leading voice for chess in Connecticut.

The NBCC is extremely proud of its heritage and its positive impact on our chess community. Despite the challenges that our club has faced (membership declines, relocations, and the stepping down of a leader of thirty-plus years), we endured every time. Because of this and because of our rich and diverse history, “The Heart of Connecticut Chess” will no doubt continue to thrive and flourish in the coming decades. The NBCC is very excited about its future, and we anticipate that future generations of chess players will continue to play an integral role in the advancement of our wonderful institution and Connecticut chess.
If your travels ever bring you to Connecticut, please pay a visit to the NBCC. Meetings are held every Tuesday at the Armenian Church of the Holy Resurrection. For directions to and more information about our club, please visit www.newbritainchessclub.com. 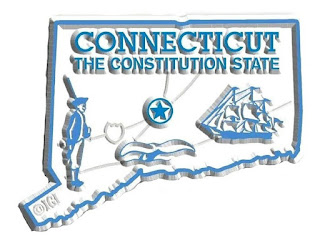 It was Y versus Z at the UMass Chess Club the other night when two of the best players sat down without a clock.  I was unable to start recording the game until many moves had been played, but the moves I was able to record were tension-filled.

Cut and paste the text below for input to a PGN viewer.

THIS WEEK IN WORLD CHESS

Do Chess Arbiters Intervene Too Much?‎

Are Bad Openings Good For Your Chess?‎

The Early Life Of Pal Benko‎

GAME OF THE WEEK BY ALAN LASSER

HIGHLIGHTS OF YEAR 2019 BY BOB CYR

FUN FACTS ABOUT THE NBCC BY BOB CYR

GOING BACK IN TIME BY BOB CYR

The chart above shows how many hits our website gets per day.

Notice how our activity spiked for a few days after we published posts.

The Coventry Chess Club had 44 tournaments so far.   We had 154 players.

74 players came only once.   I imagine these 74 came here expecting

Our core regulars are not discouraged by poor results.  To become a

better player is their reason for playing in our tournaments. 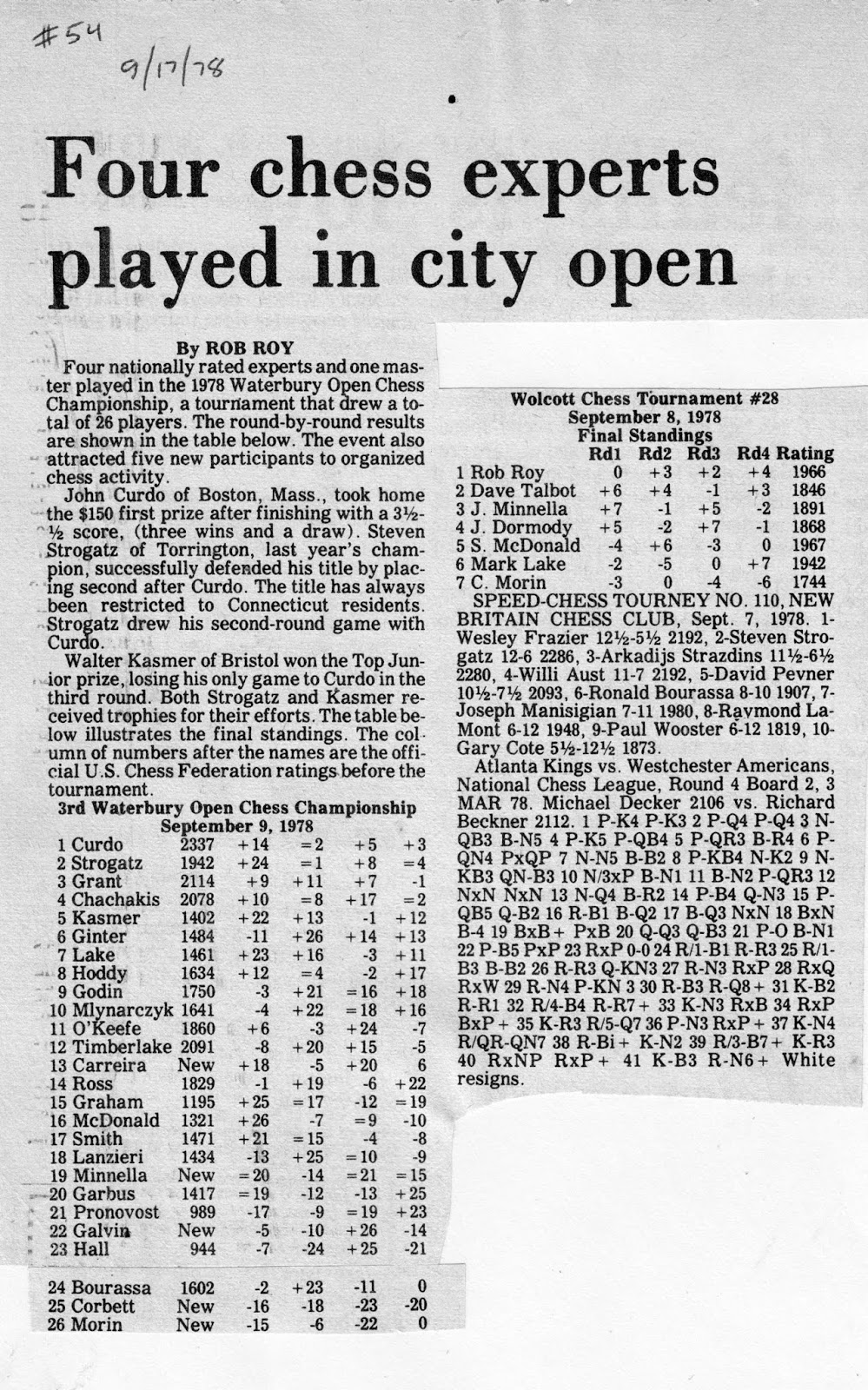 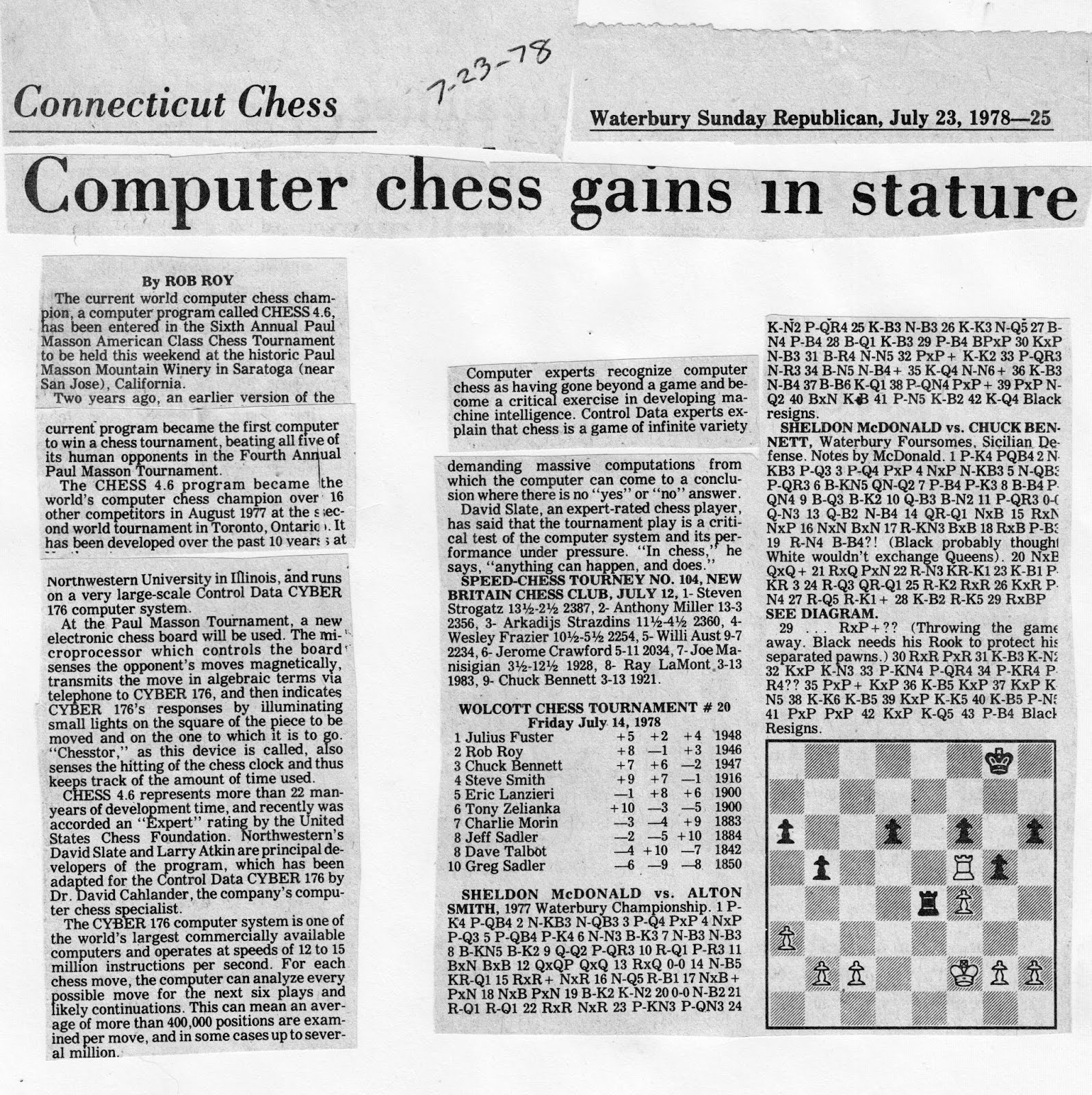 Posted by Connecticut Chess Magazine by Rob Roy at 8:18 PM Links to this post

Congratulations to Wesley So.  He won 2019 Fischer-Random Championship.  He defeated Magnus Carlsen in the finals, which left a lot of chess fans wondering how could that happen.  I thought it was Magnus’s excellent endgames and superior speed chess that made him the regular Chess Champion.   Here So tests Carlsen’s calculation ability in one of those difficult more-pieces-than-pawns positions worthy of determining a champion in any game.

THIS WEEK IN WORLD CHESS

Do Chess Arbiters Intervene Too Much?‎

Are Bad Openings Good For Your Chess?‎

The Early Life Of Pal Benko‎

GOING BACK IN TIME 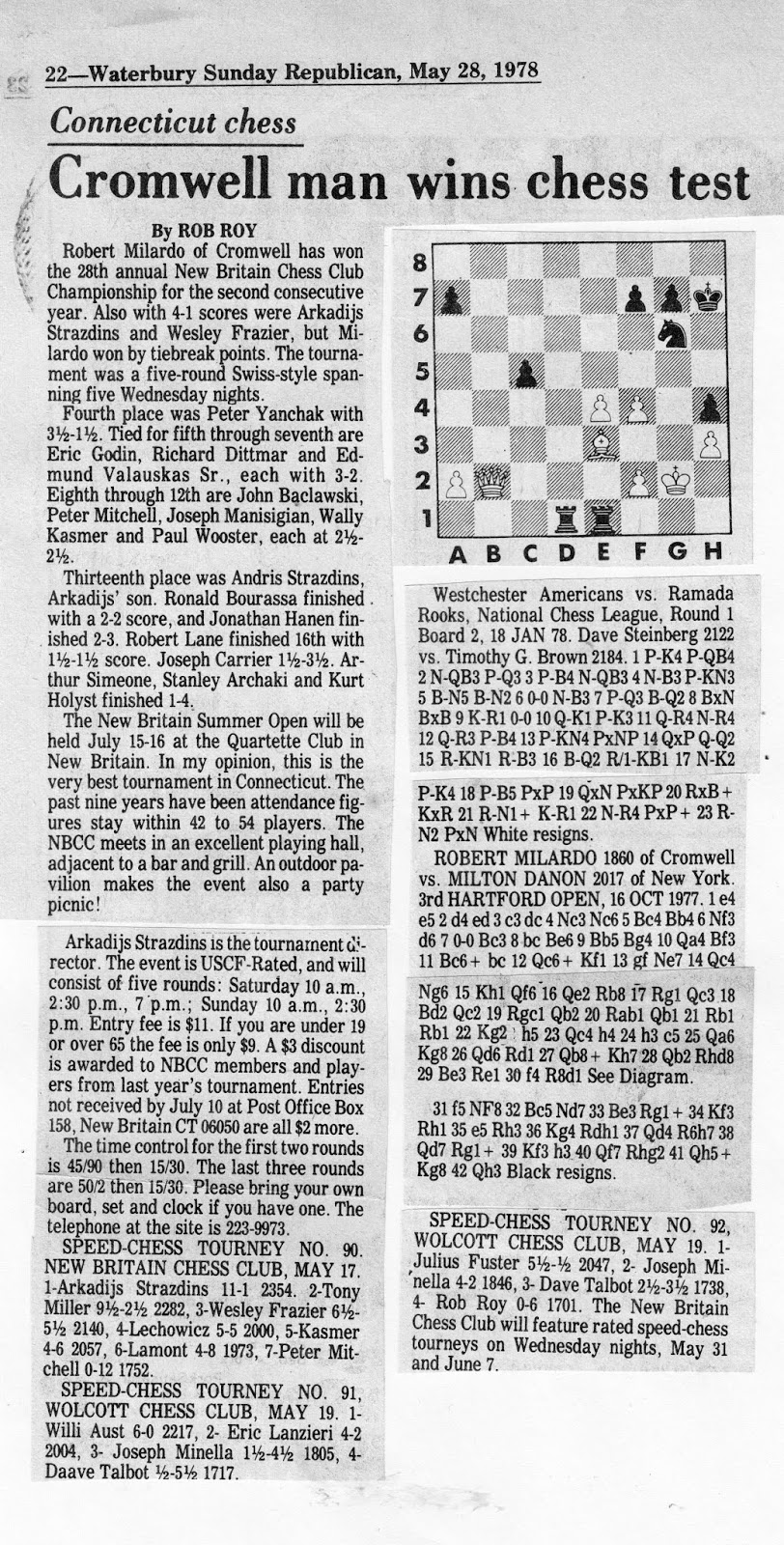 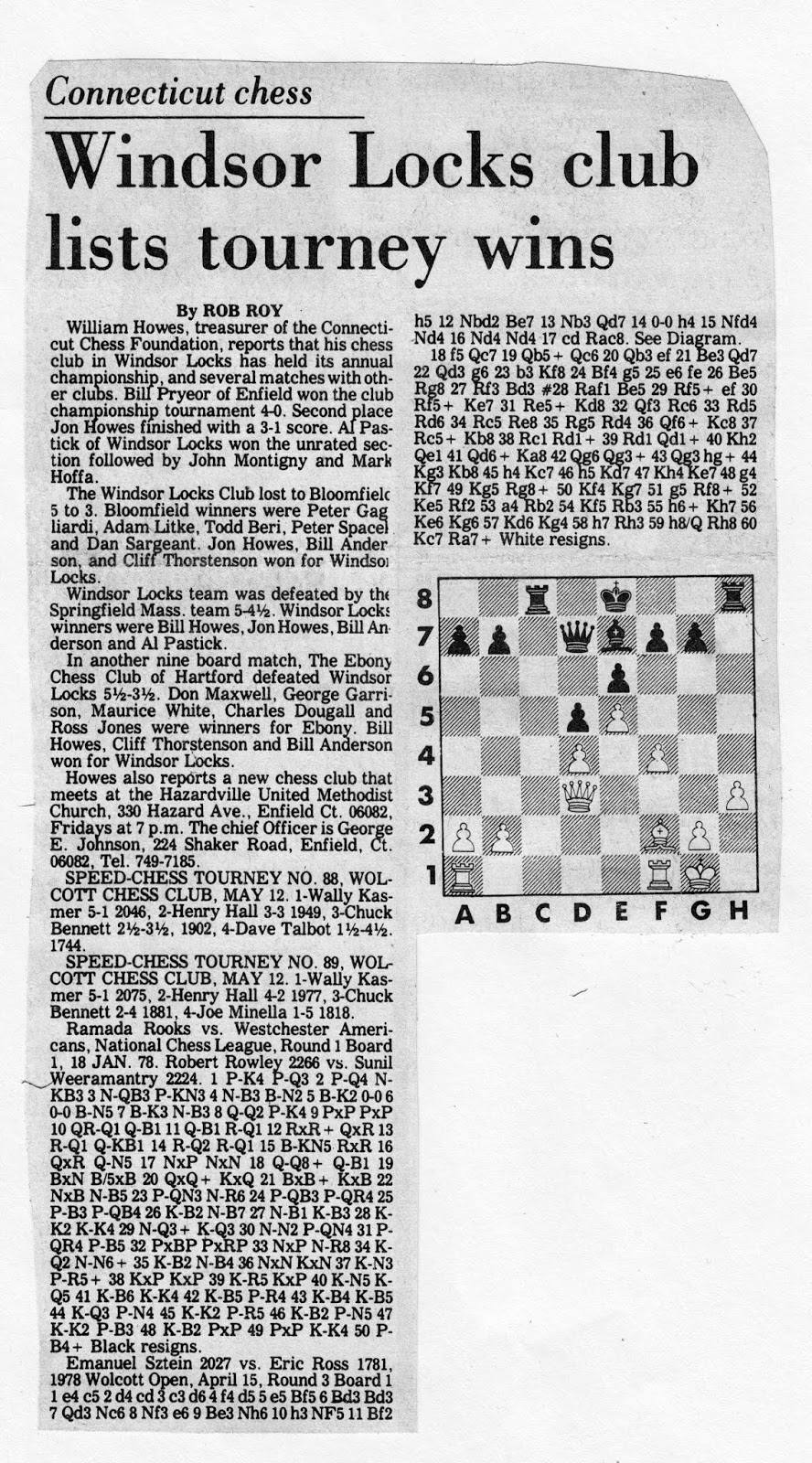 GAME OF THE WEEK BY ALAN LASSER

HIGHLIGHTS OF YEAR 2019 BY BOB CYR

FUN FACTS ABOUT THE NBCC BY BOB CYR

GOING BACK IN TIME BY BOB CYR

Posted by Connecticut Chess Magazine by Rob Roy at 2:28 PM Links to this post